Would You Go Below The Ice? 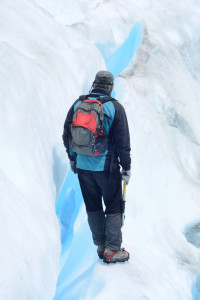 It was absolutely fascinating. This particular episode was about the Inuit people who live in the far corners of Northeastern Canada. They live on a completely frozen landscape for a good portion of the year.

There is a phenomenon they experience where the tides drop 40 feet (the height of a 4 story building!) over the course of a couple of hours. For a mere 30 minutes, water under the ice is replaced with air and they can go below the ice and gather mussels. As many mussels as they can before the water comes racing back in and the tide rises. Their typical, extremely limited diet consists of seal meat, so a few brave souls risk their very lives to enjoy and share this culinary change for one day of feasting.

It’s amazing to think about what these people would do for change. They know they could lose their life to the horrible reality of being trapped under the ice. Many who have gone before them have, sadly, shown this to be true. For mussels. We go out to eat and order from 30 choices on the menu. Whatever we want. They risk their very life to gather a bucket full of mussels.

So it is with change.

Only when we get to the point where we can’t continue doing the same thing day after day, and there is the hope of something different, will we take the necessary steps to make change happen.

What is it for you? What have you been complaining about that you “just can’t seem to change”? A relationship? Your gym “success”? Your monthly income? Your lack of time? The fact that you’ve plateaued at a certain number of members for a while now?

Leaders set themselves apart because they go where others aren’t willing. They do what others think is too hard. They climb down the proverbial ladder under the ice, risking it all, to have things be different.

This caused me to think about the people in my life who are true leaders. Not perfect, but willing to do the “hard”.

I’ve seen many, many go the easy route. Quit something. Walk away when it’s tough. Give up. Take the easy path. Resign themselves to the status quo.

But not true leaders. They hunker down and muster up even more resolve. They know that after even the darkest of nights, the sun will always rise. They fall, but they always get up stronger than before.

Some of the characteristics I admire in others are things that I hope to embody in my life.

They never give up.  Even after the third, or fourth failure in a row, they know that the fifth time can be the charm. They change and pivot, but never give up. Winston Churchill said this best… Never. Give. Up.

They have passion. During the hard times, any rational person would choose an easier path. But they love what they do, and have fun doing it. And they know that life is short, so they do what they love.

They don’t do it for the money.  They know that money is never the end all, be all. I once heard a person who claims to be a leader state, “I’m making this decision for the revenue.” The decision was to walk away from a partnership. A friendship. Sure, money is important. We all need it to survive. But it should never be the reason you try to get ahead.

They overcome the feeling of risk. Fear that comes with risk is real. It can be paralyzing. But with high risk often comes high reward. The ones willing to go below the ice are driven by this reality.

They have tough skin. They are prepared for rejection. They know that not everyone will see it the way they do. But… they keep going toward what they want. They are as enthusiastic on door #100 as they were on door #1.

They aren’t too proud to ask for help. One thing that the wisest people know is that they don’t know it all. They know that the collective whole is considerably greater than one.They surround themselves with people who are strong where they are weak, and have no problem deferring to other’s strengths often.

They believe in themselves. Arrogance can be spotted miles away, but a humble confidence is a beautiful sight to behold. What a huge difference between the two.

They dream big dreams. They absolutely know that with the right cocktail of grit, determination, and perseverance, they can do whatever they set their mind to.

They know that one of their most important investments are in relationships. Profit is important, certainly. But, you don’t get profit unless you have and know people. Really know them… where you’re interested more in helping them find their success than you finding yours.

I’ve met many who fight against the hard. To them, it’s just not worth the pain. The easier road is what they’d prefer. And that’s ok, because if it was easy, everybody would do it.

But the ones who are confident that the blood, sweat and tears are for the purpose of them becoming their best selves, are the ones I’d rather go below the ice with.

Julie’s diverse background includes being a cake designer, coaching basketball, traveling to 13 different developing countries to do volunteer work on a year long trip, working in the not-for-profit world for 10 years, starting two businesses, working as a People & Change consultant for PricewaterhouseCoopers, taking a product to market (and “failing”, only to get back up and do it a second time), and working as a business coach/consultant to small businesses.

Julie has found home in beautiful Charleston, SC. She gets super fired up when helping individuals and small businesses take their success to the next level, and when she gets to hear people’s stories. In her free time, she can be found in the boat or on the beach, hanging out with her Golden Retriever, dreaming up another business idea with her partner, Stacey, or geeking out on yet another leadership book.[/vc_column_text][/vc_column][/vc_row]